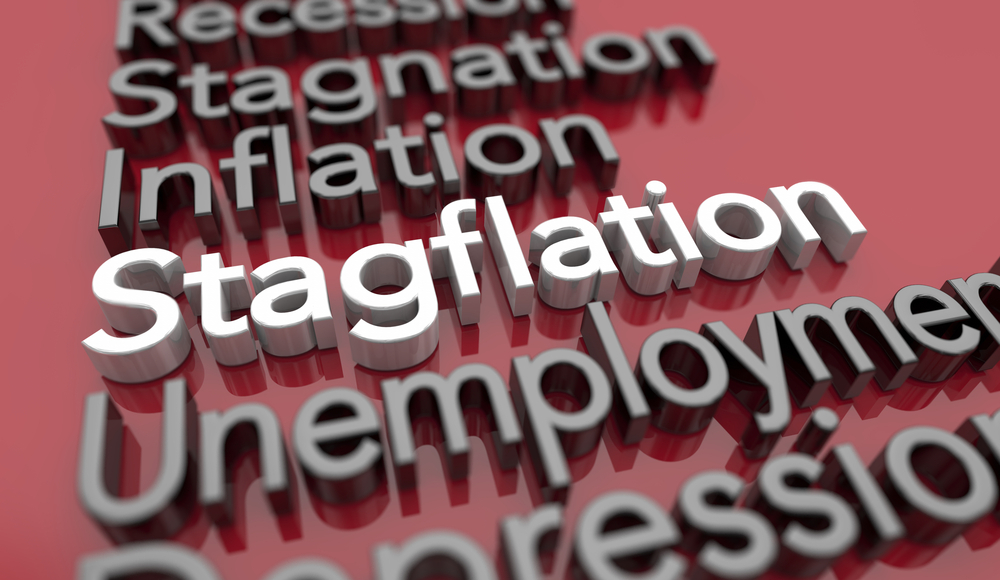 First, we had to brush up our understanding of inflation and what it means for our hip pocket and our investments. Now the term stagflation is being thrown into the economic mix.

For those with long memories, stagflation is a reminder of the late 1970s and early 1980s when the world economy fell into what then-Treasurer Paul Keating called “the recession we had to have”.

The word has raised its head again with the World Bank warning that there is a rising risk of stagflation.i This took the wind out of the sails of global sharemarkets, with Australian shares down 10 per cent in the year to June, although they have since started to show signs of recovery.ii

Despite the term stagflation re-entering conversation, the general belief is that things will not get as bad as last century, but they are still likely to be challenging.

So, what is stagflation? Basically, it’s the combination of rising inflation, high unemployment, and weak economic growth. When all three happen at the same time, then the economy and living standards struggle. So, let’s look at each of these three markers in turn.

The definition of inflation is a general increase in prices and a fall in the purchasing value of money.

Certainly, we are experiencing rising inflation right now. It’s currently running at just over 6 per cent in Australia. The war in Ukraine took its toll on commodity prices globally, contributing to the hike. While prices are off their highs, they are still hurting.

On the local front, floods on the east coast of Australia have damaged crops, pushing inflation higher.

Reserve Bank governor Philip Lowe has pointed to a top inflation rate of about 7 per cent in this current economic cycle, which is well above the 2-3 per cent inflation target the Reserve Bank uses in setting monetary policy.

A slowdown in economic growth

Looking next at economic growth, this is certainly slowing.

Unemployment, meanwhile, is at the lowest level in Australia since 1974 at 3.9 per cent.v But despite the low unemployment rate, wage growth is less than half that of inflation, so keeping pace with the rising prices is hard.

Looking at the three criteria for stagflation, unemployment in Australia is less than 4 per cent, inflation is running at just over 6 per cent, and GDP growth is 3.3 per cent. At these levels, it seems more likely, but far from certain, that we will experience a recession rather than stagflation. A recession is defined as two consecutive quarters of negative growth.

Stagflation would be a bigger problem than a severe recession because the traditional ways to deal with it are either increased government spending or cutting interest rates. Unfortunately, these solutions are both inflationary and, therefore not good tools for the current economic environment.

Back in the 1970s and 1980s, interest rates hit 18 per cent as the Reserve Bank struggled to contain inflation. With mortgages at their current size, increased rates will start hurting much sooner, which will put a brake on inflation well before rates reach double-digit levels.

The general view is that mortgage rates will peak at just over the 5 per cent mark.vi

Concern about the possibility of stagflation has fuelled the recent share market volatility and uncertainty, although it seems unlikely on current evidence. As the future is impossible to predict, it is better to sit tight and wait for the market to recover rather than sell as a kneejerk reaction and realise losses.

If you would like to discuss your overall financial position in these uncertain times, then call us.